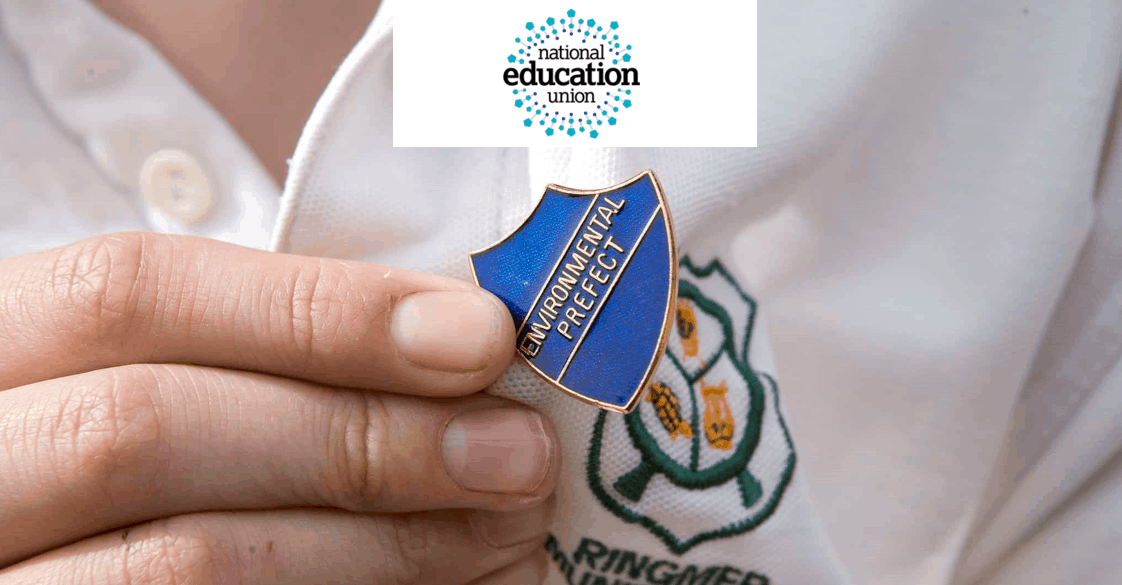 The National Education Union look at how schools are doing their bit to tackle climate change in their magazine, Educate.

Schools joining Let’s Go Zero are supporting the campaign’s ambition to reduce their carbon emissions by the end of this decade so they no longer contribute to climate change. And they are adding their voices to demand more support from the Government to achieve these aims.

The zero carbon schools campaign’s focus for cutting emissions is in seven main areas – energy, food, procurement, waste, water, travel and school grounds. It also wants to see the climate crisis included in the curriculum and it encourages schools to swap ideas and share best practice.

Scott Fry, premises manager at Exmouth Community School in Devon, aims to buy local whenever possible to reduce delivery emissions and support local businesses, and he’s sharing this approach with other facility managers across the South West.

“We’ve only got one world, we can’t keep chipping away at it, we have to show the students it’s important to protect it,” says Scott. “The Let’s Go Zero initiative will help put weight behind what schools like us are doing – I’ve been doing most of this solo and it’s been quite lonely at times, so this is wonderful. I’m committed to spreading the word.”

An early signatory to the campaign was St Francis Xavier School in Richmond, North Yorkshire, where energy efficiencies, including the installation of 48 solar panels, have saved more than £8,000 a year. Pupils have also managed to reduce food waste by weighing the amount that is thrown away every day.

“Children are encouraged to think carefully about the food choices they make each day,” explains teacher Margaret Land. “Knowing all the effort that goes into growing and farming food and then seeing it thrown away is awful. In our first year of measuring we threw away a staggering five tonnes of food waste and this cost the school £1,000 a year. In year 2 we reduced it to four tonnes and saved £500.”

Margaret is sustainability lead at the St Margaret Clitherow Catholic Academy Trust in Richmond, of which St Francis Xavier is a part, and she has written a sustainability strategy to be adopted by the trust’s 17 schools. As well as tackling food waste and water usage, the draft policy includes procurement, transport, biodiversity and energy usage.

Margaret says: “I would like to see energy monitors in all our schools, visible to our staff and students. We would like all our utilities to have smart meters allowing us to capture timely and accurate energy data and this will further help drive behavioural change. “This investment will save money and help us to care for the environment. Our schools have the capacity for further solar panels but, as a newly established trust, there are many other important financial challenges to address.”

As environmental co-ordinator for King’s Academy Ringmer School in Lewes, East Sussex, Stephen Green has supported more than 150 other schools to go green over the past 15 years. “There are so many common sense things that society can do to make significant differences. You don’t need to be obsessive about it – you just need to be sensible.”

He says simple actions, such as working out how to switch off heating, can cut carbon emissions dramatically, and installation of renewable energy can make even bigger changes but is obviously more expensive.

This is where more support from the Government is key, says the climate solutions charity Ashden, which is spearheading Let’s Go Zero. In the Chancellor’s spending review last November, Rishi Sunak pledged an extra £2.2 billion for the schools’ budget, with the promise of more to follow.

But Ashden’s chief executive Harriet Lamb says that although this was a good start, it fell “hugely short” of meeting the Government’s own carbon targets.

An estimated £23 billion is needed to be spent on English schools alone to get them to zero carbon, Harriet says. “With 32,000 schools in the UK, the Chancellor’s announcement does not show a serious commitment yet to reaching zero carbon,” she explains.

“Schools have been signing up to Let’s Go Zero, pledging to play their part on the journey to zero carbon by 2030 – but they cannot do it without much more leadership and support from the Government.

“Investing in taking schools to zero carbon will also generate badly needed jobs across the country, creating the green skills needed now and in the future.”

Let’s Go Zero is supported by a coalition of organisations led by Ashden, including WWF, Fairtrade Foundation, Carbon Trust and Sustrans.

This piece first appeared in Educate, the magazine of the National Education Union

This story first appeared at Sky.com Watch Sky’s video about St Vincent’s climate action A network of schools across Merseyside will enhance their teaching…
Read Post