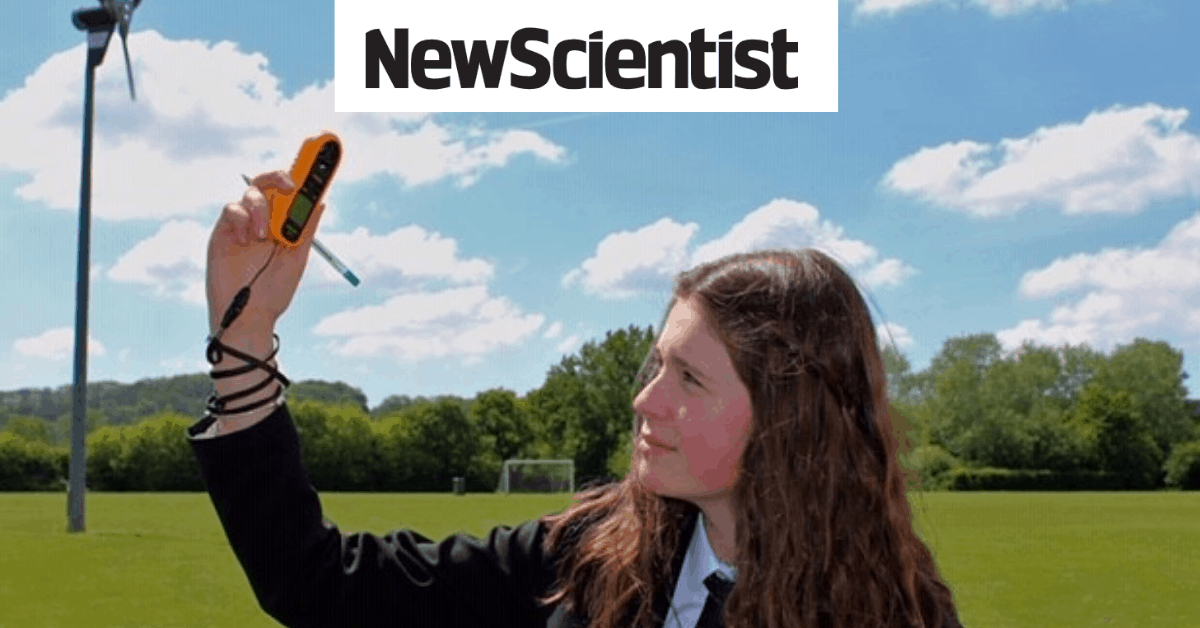 The New Scientist turns to Let’s Go Zero, the new campaign to decarbonise schools, in their latest Fix the Planet newsletter. What are schools already doing (a lot!), what works and how are pupils getting involved?

Welcome to Fix the Planet. Before I turn to this week’s subject, a moment on the US election. The incoming Biden-Harris administration has ranked climate change one of its top four priorities. Joe Biden has committed to taking the US back into the Paris agreement when he takes office – but let’s remember that is a low bar for ambition.

Fortunately, the president-elect’s plans go a lot further. The big thing is his transition team floating the “opportunity” for a recovery to put the US on track for net-zero emissions by 2050. That’s enough to curb 0.1°C of global warming by one estimate (that’s a lot. The world has warmed around 1°C already, and leaders have committed to not breaching 1.5°C).

But let’s turn from the macro to the micro for this week’s dispatch. Talk about schools today may be mainly about covid-19 and closures (in Wales, some year groups only just reopened). But cast your mind back a little over a year and the issue was whether kids would stay in school on Fridays rather than protesting about climate change. This week, climate action and education are back on the agenda, with a new campaign to decarbonise schools.

It’s not just governments – most recently Japan and South Korea – pledging to go net zero by 2050. This week sees the launch of the “Let’s Go Zero” campaign, for UK schools pledging to get to net zero in a dramatically more ambitious time frame, by 2030. Some people ( Extinction Rebellion, for example) would like that to be 2025, but 2030 is still an incredibly bold timeline for headteachers running sites that in some cases rely on buildings dating back to the 19th century. The campaign is run by UK charities Ashden ac Global Action Plan (which has a related youth climate summit this week), plus other school groups.

WHAT ARE SCHOOLS DOING ON CLIMATE CHANGE?

A lot, often on tight budgets. Rural school King’s Academy Ringmer, in south-east England, is saving around 350 tonnes of CO2 annually with a biomass boiler, and cut its energy costs by thousands of pounds a year by installing solar panels, a wind turbine and heat pumps that extract heat from the ground. The school can meet all its electricity needs at times in summer. “There’s this feeling here that we can do something. We’ve managed to get children to believe that what we’re doing here is having an impact outside,” says headteacher Sian Williams. The school has huge buy-in from pupils: about a fifth are “eco reps”. As a result, there is no litter, and seagulls – sometimes a pest at schools in the area – don’t bother with Ringmer, says Williams. The success has attracted interest from the UK, with David Attenborough visiting and national newspapers calling, and as far afield as South Korea, where a TV show has been in touch.

The school is far from alone. South Molton Community Primary School in south-west England has a “no electricity day” once a term, North London Collegiate School has a “no beef menu” (beef production is incredibly carbon-intensive ), while simple energy-saving measures such as turning off lights and PCs at St Francis Xavier in north-east England saved £8000 a year. Margaret Land at St Francis Xaxier says a key step was showing staff and students how much energy they had saved. “It had such a positive effect, seeing what they were doing by changing behaviour. Saving money which could to go into other resources, which schools desperately need. It’s just so rewarding,” she says.

It’s important to get hold of data (such as reduced energy bills) to reward staff and pupils, and show them they are making a difference, says Land. Ed Wesson, headteacher at Skinners’ School in south-east England, sees the answers in infrastructure and education. The school has just opened a new, highly efficient building with solar that is “almost carbon neutral”, but is also in the process of replacing most of the windows on its old buildings.

On the educational side, the school is mulling a proposal for a small “trips tax” for donations to a tree-planting scheme. Longer term, Wesson says deeper conversations may need to be had about trips, for example asking the question of whether rugby players need to travel as far as New Zealand, but coul

d perhaps go to Ireland instead.

As a strong science school, one thing he has found is “if you can attach it to the science you have an advantage with bright, resourceful students”. A member of the school’s gardening club, for example, designed a way of collecting run-off water and pumping it uphill with a solar pump for use on vegetable patches. Making the link to careers is another. Wesson says he hopes: “They see science as not just a subject, but having a role to make the world a better place, whether through nuclear fuel and clean energy or recycling.”

Two big barriers are cost and staff time, says Williams. “School budgets are always going to be tight and stretched,” says Land. Some UK schools between 2011 and 2016 took advantage of government support to fit solar panels, but such capital-intensive projects are not for every school. A new £1 billion UK government scheme to decarbonise public sector buildings may help some schools now.

In some cases, buildings may just be too old to get to net zero – Wesson points to the Gothic windows at his school’s original building. It’s too early to say whether net zero by 2030 will be feasible, he says, but it’s an aspiration and he thinks the school can draw up a “road map” by 2022 to find out what is possible. Regardless, such a high goal plays a role in “shifting consciousness amongst teenagers”, he says.

One thing that doesn’t work, Wesson says, is hectoring around diets. Still, one subject he is happy to lecture pupils on is waste, especially clothes. “They lose clothes, they replace them. I don’t feel any guilt in haranguing them on that,” he says.

WHAT ROLE DO PUPILS PLAY IN ALL THIS?

For one, they are putting pressure on adults. “They’re always pushing us,” says Williams, citing recent eco rep complaints about disposable face-mask waste. The other thing they are doing is making teachers and headteachers take serious action if they want to be taken seriously by students. Williams bought an electric car even though it wasn’t cheap, while Wesson says that to justify telling students what to do, “we as a school have to walk the walk”.
This piece first appeared in the New Scientist’s Fix the Planet newsletter.