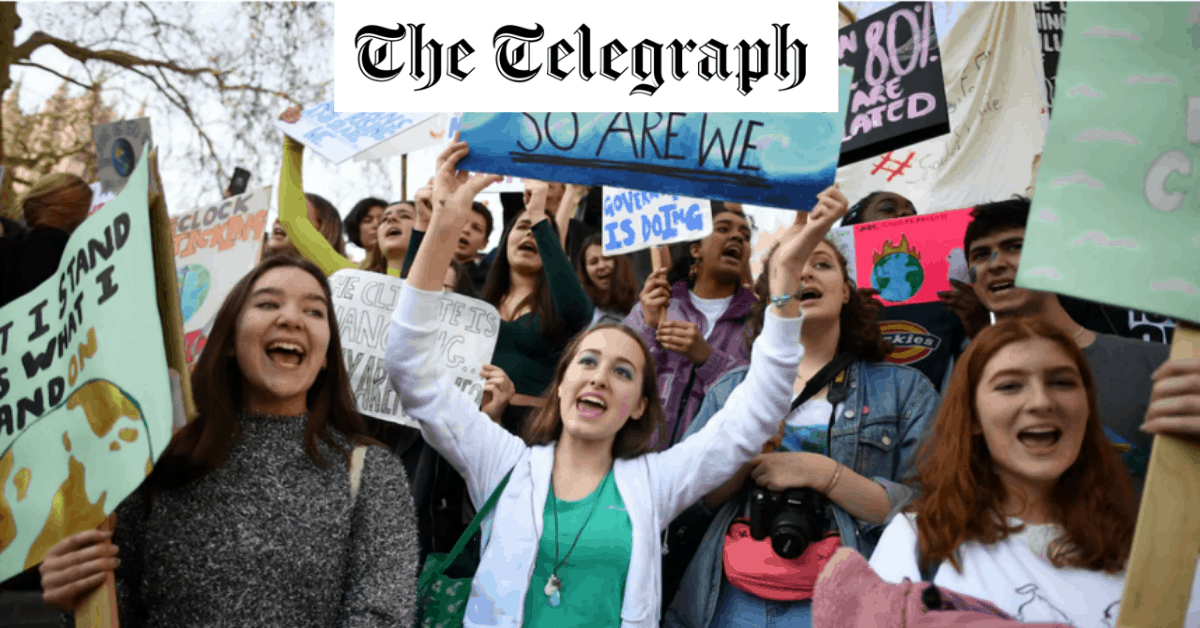 The Telegraph looks at how schools can achieve their Let’s Go Zero pledge to go zero carbon by 2030. As well as taking action in key areas like energy use & waste, collaboration is crucial – between staff, students, education providers & the government

As schools prepare for the Youth Climate Summit, campaigners are hoping Covid-19 has not set back plans for sustainability.

November 9th marks the beginning of the Youth Climate Summit, a free and week-long virtual festival with discussions and events based on themes ranging from ‘Food, Farming & Forests’ to ‘Fashion & Consumption.’ It also marks the launch of Let’s Go Zero, a schools-driven campaign supported by some of the big-hitters in the space, including climate solutions charity Ashden, Soil Association, Carbon Trust and Global Action Plan.

According to campaign organisers, a zero-carbon school is one that, both ‘on its site and through all of its activities… does not contribute to climate change through carbon emissions.’ There are eight key impact areas: energy use, travel, waste, water, food, procurement, school grounds and ‘other’ things, such as promoting sustainability through teaching resources.

If it sounds like a mammoth task, then take heart from Edd Moore, eco-coordinator at Damers First School in Dorset. As well as co-hosting the second day of the summit, the school already ticks all eight of those boxes, “but it has taken eight years to get to this point,” Moore says, “which makes 9-10 years entirely doable, even allowing for the current situation with Covid.”

Despite the official launch still being a few weeks away, 30 schools have already signed up to the pledge. By doing so, not only are they publicly stating their intention to be zero carbon within the next 10 years, but are also looking to the Government to support the necessary changes by allocating budget to, for example, improving energy efficiency with the installation of solar panels and double glazing. Rather shockingly, English schools alone spend £600 million per year on energy – around 60 per cent of which is wasted out of hours.

At a time when education budgets are already stretched, how feasible is this call for support?

Jenny Chapman, Biology teacher and Head of Sustainability at North London Collegiate School points out that there’s a cost benefit in the long term, even when there’s an initial outlay involved. Additionally, she says, “It’s a mistake to assume that all of these changes are going to cost money. Behavioural change costs nothing – and has by far the biggest impact.”

At her school, this takes the form of discouraging driving to school in favour of walking, cycling or using public transport. The school has a ‘No Beef’ menu and students are encouraged to reduce foot waste by being mindful with their lunch choices. “They can also do things such as closing windows, turning monitors and projectors off and reminding teachers to do likewise,” she says.

“It’s not about saying ‘Today’s lesson is about sustainability,'” says Alex Green, schools manager at Ashden. “It’s about building it into teaching and into every aspect of educational messaging: in art, in science, in language, in everything that schools do.” A simple example? Maths problems based on collecting eggs from a hen, rather than buying them at a supermarket.

Edward Wesson, Head Teacher at The Skinners School in Tunbridge Wells, agrees that the necessary changes need to be embedded into the curriculum, advocating a three-pronged attached based on action, assemblies and learning. For example, he says, “Out STEM offering is designed to encourage students to look at closed-loop solutions, and our careers advice encourages the creation of a more sustainable world.”

He also believes that a school’s stance on sustainability, like its position on racism or bullying, needs to be written into its statement of values. At his school, he says, “waste is a huge problem. We have a mountain of lost property and students rarely bother to check it – they’ll just go out and replace the lost item.”

Of course, Covd-19 has created some difficulties around sustainability, not least the eschewal of public transport, and the preference for disposal over reuse, to avoid germs. It’s also, with its new systems and requirements, given teachers rather a lot to contend with on a daily basis. “We had a ‘plastic free schools’ initiative going before lockdown,” says primary school teacher Frankie Landon, “but the return to school has been bonkers. We just don’t have a spare second to attend to it at the moment.” Quizzing my own primary-schooler on how active his school’s usually high-profile Eco-Committee has been since school returned, he says that most of he messaging has come from the Health and Wellbeing Committee.

Given that there’s been so much concern around how this year has affected child mental health, this makes sense – yet, says Moore, there’s no need for one to cancel out the other. “It’s well known that time in and with nature is restorative,” he says. “Raising children’s awareness about the environment can be as simple as taking a lesson outside or using nature to illustrate an example or boost creativity – and they’ll get the mental health benefits of that too.”

“This is about empowering students,” says Chapman. “Students don’t need any more awareness: they don’t need to watch another David Attenborough documentary – they are fully aware of the scope and severity of the problem, but without empowerment they are going to feel scared and overwhelmed. This is about showing them that they can turn that awareness into action and see how they can make changes.”

It’s also about educating heads and school business managers, says Green, adding that the campaign will be developing footprinting tools over the course of the year so that schools can make informed decisions about where they need to make changes.

“For instance, a large percentage of schools’ carbon impact is procurement,” she says. “Collectively, schools spend a lot of money, so there’s a really good opportunity for them to be a force for change within their supply chains. Imagine: if a school says that they are going to have two vegetarian days a week, it will influence the offering of the catering companies, who may then promote it to other schools.”

For Chapman, this knock-on effect is one of the most exciting aspects of the campaign. “It enables schools to connect and support each other, sharing inspiration, ideas and best practice,” she says.

“By 2025, we think all participating schools need to have a full road map of how they’re going to achieve zero carbon by 2030,” says Green. Part of that, she says, is working together – not only in terms of collaboration between staff and students, nor just with other education providers, but also with the government.

The key word here is ‘with.’ “It’s not about demand and lobbying,” she says. “Schools and students can only do so much to make that systemic change; government support is vital. It’s about saying ‘we want to work with you, we are responsive to change. We want to be part of the solution.”

This piece first appeared in The Telegraph