The Eco Team at St Francis Xavier School explain their work. The school has joined the Awn am Sero, campaign, which is uniting schools pledging to go zero carbon within a decade. Before we hear from the students, Alex Green explains what is involved.

Schools across the UK have thrown themselves behind a campaign declaring their aim to become zero carbon by 2030 – with more than 100 trailblazer schools signing up within less than a month of our launch last term.

Although off-setting will be a key part to decarbonising UK schools, at this stage the campaign focuses on supporting schools to focus on carbon reduction.

Let’s Go Zero aims to help schools learn from their peers, share best practice and connect with sources of support. The campaign will be driven by the work of schools, with support from a coalition of sustainability partners including Global Action Plan (organisers of the Youth Climate Summit), the WWF, the Fairtrade Foundation (Fairtrade Schools), EcoSchools, Sustrans (School Streets), and the Soil Association (Food for Life).

Signatory schools are working to cut carbon in seven key areas – energy, food, procurement, waste, water, travel and school grounds, as well as addressing the place of climate in the curriculum. The 100 schools signed up to the campaign as of December 2 include academies (54 per cent), maintained (33 per cent), and independent schools (12 per cent).

We must get behind the incredible commitment by young people who are demanding action on climate. There are 32,000 schools in the UK and 10 million people walk through school gates every day. Working together we can create an amazing opportunity to take bold action to go green in schools and support our young climate ambassadors.

Schools able to make radical energy efficiency improvements will make significant carbon savings: 60 per cent of energy used by schools is wasted out-of-hours and schools in England alone spend £600m per year on energy – the second largest budget item after staff salaries. Knock-on benefits to parents, communities, and businesses, as well as students are significant. Local purchasing of consumables, paper, furniture or bulk purchasing for instance, can be part of a school’s strategy, so as to reduce deliveries and keep business local.

But getting to zero carbon will need to be a government-supported effort too. In June last year, the UK government announced £1bn in funding for 50 major school new building projects in England, but with 24,000 schools that is just 0.2 per cent of the total. If all education buildings in England are to be net zero by 2030 it is predicted to cost at least £23.4bn. We cannot rely just on the good will of school management – they will need government support and funding mechanisms to make the necessary changes. We need to move at pace and scale to reduce severe climate impacts which will affect these children’s lives.

The recent St Francis Xavier School (SFX) Eco Team annual elections are not dissimilar to a political leadership contest. Students wanting to lead the team are asked to write a brief eco-manifesto. A ballot is then organised with the candidate who receives the majority of the votes declared the new head of the Eco Team.

Eco Team head and deputy head: This year, Amelie was appointed to this prestigious role, with Mathilde as her deputy. The girls are the first female leaders of the team (which was formed in 2016) and are all about action.

Amelie explained: “I’m now in my third year in the Eco Team. During this time I have seen what we can and are capable of doing if we work together (which we do!). I have the great privilege of being the Head of the Team this year.

“I love the community we have built. My hope is that our school can become carbon zero. There is so much more I want to do. I want to see our school run on solar power in the time I am here and stop our buses polluting the air that we breathe. I hope that what we do this year helps more people to understand that we cannot continue living the way we are. By all of us working together we can change our world for the better and much, much more.”

Mathilde, meanwhile, hit the headlines recently when she wrote to chancellor Rishi Sunak, who is the local MP, challenging him to do more to care for the environment. 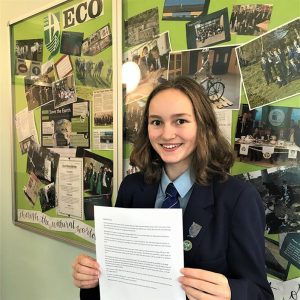 Mathilde said: “I’ve been part of the SFX Eco Team for two years now. My favourite part of being in the team is the experiences it brings us, such as when we went to the Guardian newspaper after one of our members wrote a letter to them explaining how they could use potato starch bags instead of single-use plastic to wrap their magazines.

“I wrote my letter to Rishi Sunak because he is our local representative and he encourages people. If he’s doing everything he can to help then that will encourage other people to realise what they can do to help as well.”

Amelie has recently appointed her new team. They include the following roles:

Head of biodiversity and energy: “Every day I fill up bird-feeders all across the school grounds with a large quantity of the food coming from donations. The biodiversity team has also installed two wildlife camera traps which have recorded: squirrels, nuthatches and chaffinches.

“Each season the school has a Bird Watch Week in order to quantify what is living in the school grounds. I am also working to try and reduce the amount of energy wasted through leaving lights and appliances on. Since the pandemic has limited discussions between bubbles, a computerised system has been used so that teachers can confirm that they have turned off all of their electronic devices when they are not needed. I am passionate about small things making a big impact.”

Head of grounds (including litter-picking): Louis will lead the team’s new project to develop a “green corridor” around the edge of the school’s field. He explained: “We want our students to get closer to nature and we have lots of ideas for our green corridor including planting a native hedge to help the wildlife and also log piles to help insects.”

Head of finances: Jake has inherited a strong financial position following the Eco Team’s 2019 Education Estates Award for Sustainability and a generous grant which the team received from the local council following their hard-hitting eco presentations which challenged community leaders to do more to care for the environment.

Head of letter-writing and editor: Olivia is editor of the St Margaret Clitherow Catholic Academy Trust’s Green Samaritan, a newsletter which is written entirely by students from across the trust’s 17 schools.

She said: “Our aim is to increase awareness of the environmental issues that are affecting all our lives today and how we are helping in our own little way to protect our wonderful world.

“In recent years we have seen some truly shocking images of the damage humans are doing to the earth and it is up to all of us to help sort this mess out.”

Other positions: Other key positions include Charlotte, who is head of food waste, and Hugo, head of fundraising. Hugo with support from Amelie organised the team’s 100th litter pick to mark their “Love the environment” day in 2019, raising more than £500 for two eco-charities.

The role of head of single-use plastics will be taken on this year by a group of year 7s, while head of supplies (including paper) will be Helen, who is determined to encourage our trust’s central team to consider sustainability as part of their buying decisions.

Elsewhere, Scarlet will lead the team’s recycling initiatives and Harry will head the team’s design technology work, building on the success of their hedgehog home and eco-sculpture “Ronnie the Re-cyclist”, the latter being made from eco-bricks. Ronnie was on display in 2019 as part of the UCI junior bike race, which started from Richmond.

This year the team has also created a new and exciting role – head of sustainable travel – which will be taken on by Jack, now in his fourth year in the Eco Team. Determined to tackle pollution, Jack will encourage drivers to switch their engines off when they are idling near the school among other initiatives.

And finally, a message from Charlie, the team’s new head of communications, who is in their fourth year in the Eco Team, during which time they have been both head of food waste and head of the team itself: “At SFX we’ve undergone many challenges such as reducing our food, energy and paper usage and speaking out in our local community about how we should try to become carbon zero.

“I am now thinking about different ways that we can promote our ‘care for the environment’ message to encourage everyone to take small steps to a cleaner greener future that supports wildlife.”

A word from the CEO: Amy Rice, CEO of the St Margaret Clitherow Catholic Academy Trust, which is made up of 17 schools including SFX, has put sustainability as one of the trust’s strategic pillars. She said: “We recognise that everyone’s talents and involvement are necessary to address the environmental problems that we are now facing. We know that ‘care for the environment’ is important to our children and is something that as a Catholic trust is a core part of our being.

“Our children are passionate about this issue and we now understand more clearly the importance of nature on our mental health and wellbeing. The decisions we make now are so important to ensure that we protect our students’ future.”

We’ll leave the final word with Charlie: “Last year many of us made an individual eco pledge to help the environment. Maybe you can all join us to do this in 2021?”

Let’s Go Zero: To sign up to Let’s Go Zero you must be the headteacher, a senior leader or a governor. Visit www.letsgozero.org or follow the campaign on Twitter.